Hoping to finish the mitts and the sweater by year-end, but for now one finished scarf. It really is a scarf,  I just tacked it on the mantel for a somewhat out of focus pic. So worried about getting enough light on a gray afternoon that I forgot about keeping my hand steady. 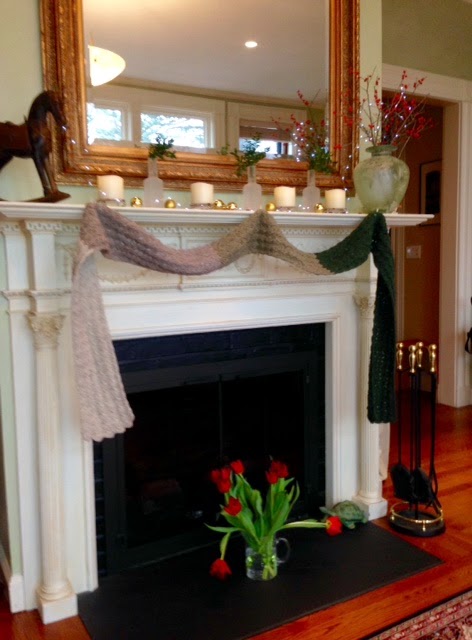 This one jumped the queue because I needed a simple crochet project to take my mind off the counting problem I was having with the mitts. The pattern is dottie angel's a woolly warm tres long-scarf . The yarn is Brooklyn Tweed Shelter in Fossil, Woodsmoke, and Button Box.

and the year winds down through the days which are shorter and shorter.  It's arbitrary, I know, but the year-round calendar of holidays, holy days, schools days and vacations was etched into my internal clock early on, and the dwindling light of December is impossible to ignore.

I've  a mere three items that I hope to finish by year-end: a scarf, a sweater, and a pair of mitts.  Let's not count the three or four (or more) things that are hidden in bags inside of cabinets inside of closets because although it's not quite "out of sight out of mind," it is "what I don't see can't spoil my fun." At least in the short run.

I did finish a pair of socks, men's size 11, this week.  Thank you, Opal, for producing the 8-fach XL that knits up in a flash. Even for giant socks the cast on is only 48 stitches, and I used a nothing fancy, practical K3 P1 rib for the leg and the instep.  These aren't the most glamorous socks in the drawer, but they will last for a really long time.  Unfortunately, the grim gray weather is also lasting for a really long time and the lighting around here isn't the best. 
File this away for "Night before Christmas and no gifts in the house."  Or for "Polar Vortex coming and no scarf on the shelf."

Stock up on big thick yarn and a big fat crochet hook and be ready to produce something impressive in a very short time.


I've tweaked the prototype of my crocheted version of Clare's Outlander cowl and you can download the pattern right now:  Out of Time Cowl.  For free.

Happy Holidays to Me

We haven't exchanged gifts in our family for years.  At one time,  everyone gave something to everyone else.  Then we decided to draw names and be responsible for one gift only, which layered on the pressure for perfection and though we may have saved time we didn't save much money.  Next we tried stocking stuffers, but some of us kept sneaking things like earrings or fancy pens or artisan chocolates in among the candy canes. These days we stick to Yankee Swap and try to outdo each other with silliness, with bonus points for finding something and rescuing it from the landfill.

This means that outside of one or two small items for friends, and some baking, holiday crafting can be pretty much all about me. And since this is my blog, I can deck it out in the traditional, if garish, red and green color scheme for a few weeks.

This week the gift-me in progress is  dottie angel's a 'woolly & warm & tres long" scarf. 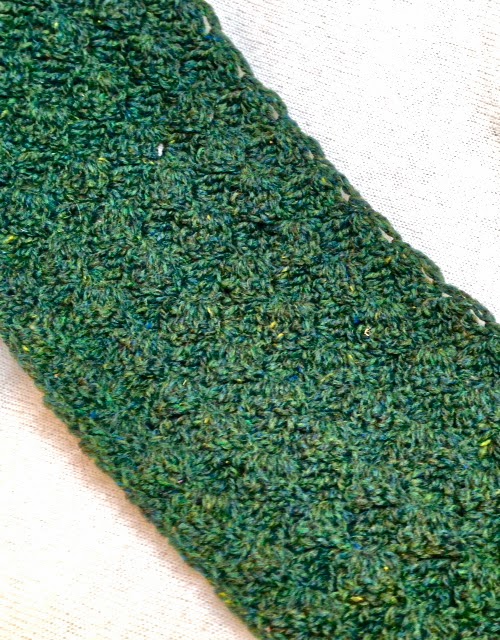 Bonus points for crochet which is easier on my hands right now.  Bonus points for simplicity; it's essentially a one-row pattern. More bonus points for using yarn that I already had:  five skeins of Brooklyn Tweed Shelter in shades of green and natural:  Button Jar, Foothills, Woodsmoke & Fossil.

I may be guilty of rushing the retrospective season, but I'm going to take a look back at my crafting year. There's a lot not to like, so I want to get it over sooner rather than later.  Then I can get on to the much more entrancing project of Pie in the Sky, or, Plans for Next Year.

But before the pie, the penance, and so to the examination of a crafter's conscience:

Did I learn the new skills I planned to this year?

Brioche knitting? Stranded knitting? Nope, not a bit of either.  I signed up for a Craftsy course, bought a book or two, but that's as far as my education went.  Not only did I not learn something new, but I think I lost a few skills I thought I had, like counting.

Did I improve my picture-taking?

Some of my photos look better, but not because I really started focusing on composition or the quality of light.  What I did was use a microfiber rag to clean off the camera aperture on my phone.  Amazing  what a little housekeeping can do.

Did I make this the Year of the Sweater and the Sock?

Oh, dear, seduced by the quick and the colorful once again.  I did complete one sweater for myself, with a second about 85 percent finished which has slightly more than a snowball's chance in hell of completion by year end.  I knit four pairs of socks. Do the Frankenmitts count? They should, there's as much knitting as a sock, but without the complication of Kitchener Stitch.  So, I'll just count them in: five sock or sock equivalents, with one more pair of each on the needles.

Actually, I did complete one other top for myself, (I hesitate to call it a sweater, it's more of a lacy muuu-muu), but I think it is headed to the compost heap.  It's too dire for the donation bin, and I just can't bear the thought of frogging all those yards of fuzzy silk-linen.

Anything positive to report?

Stash accumulation diminished quite a bit, although de-stash foundered.  I did haul my sewing machine from the back of the closet and completed some minor home-sewing and clothing alterations.

I don't want to make any excuse except to say that 2014 has been a stressy year, with a lot of distractions.  This year, the knitting and crocheting took the place of the comfort food I couldn't eat.

Comfort crafting, like comfort food,  is more soporific than stimulating.  It doesn't engender much of a feeling of accomplishment, just a sense of time spent.  It can be soothing until it becomes just plain boring. There is a place for it, of course, just like there's a place for mac and cheese or a soft blankie, but I'm hoping for something a bit more adventurous in 2015.  Colorwork, here I come.

The Pantone Color of the Year 2015 is actually called "Marsala," but what the style overlords mean is not a festive bottle, but the red-brown dregs, the residue, the leavings.  And Marsala? As in Veal Marsala? Veal as in meat in captivity? 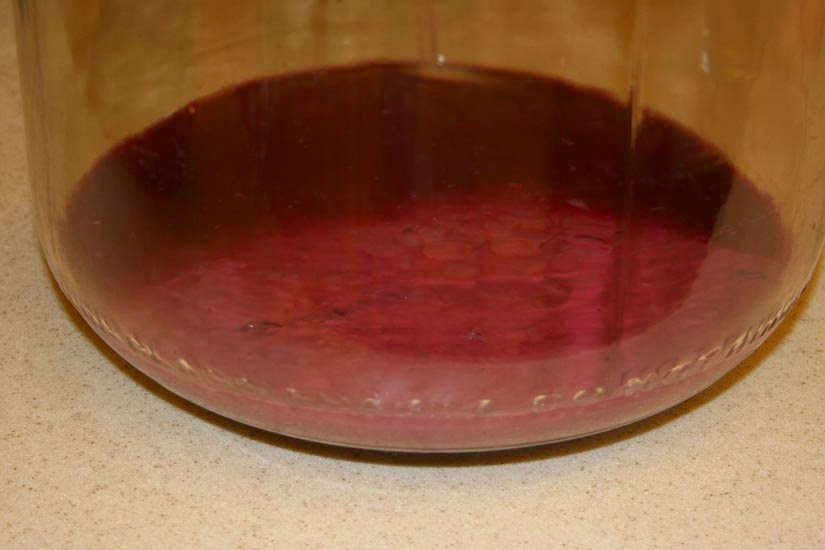 Appetizing or not, I'll take it, because it is the first color in years that I can actually wear without looking like an escapee from either the clown factory (I'm looking at you Radiant Orchid) or the ICU (that would be you, Emerald).

I just happen to have a sweater's worth of one of my favorite yarns: Quince & Co. Lark. And it is  the Malbec colorway.  Wine is wine, right? I think I can drink, um, I mean knit, to that. 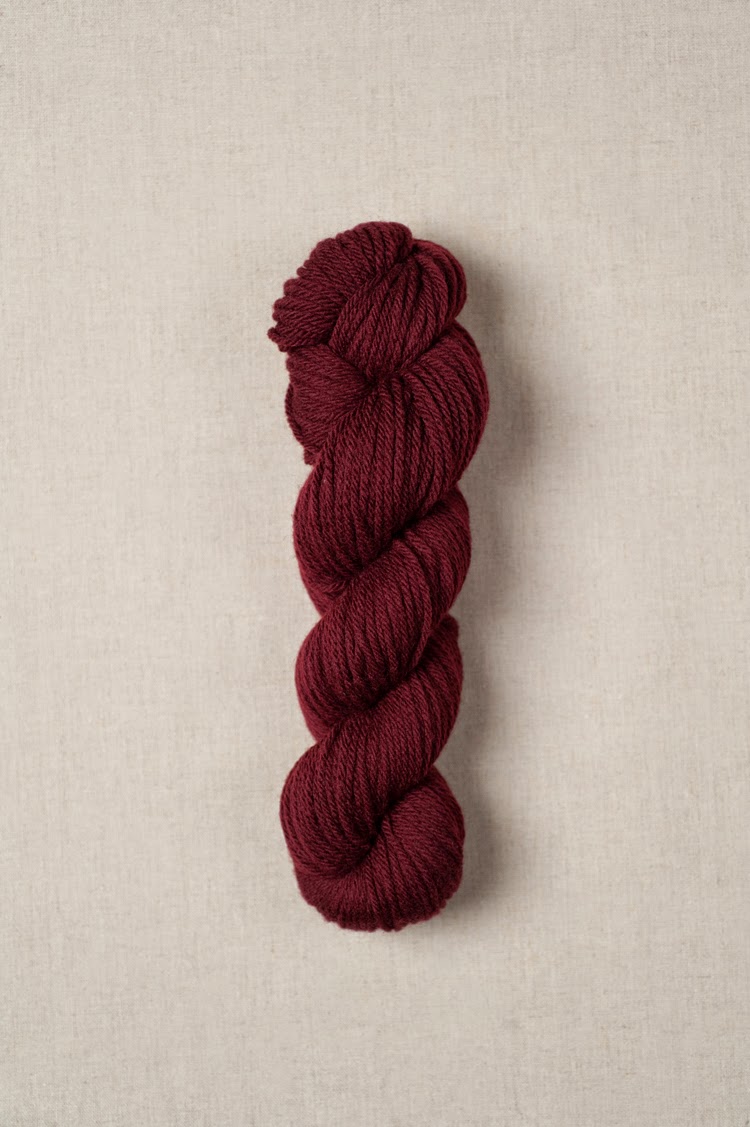